Royal Enfield to double production by 2013 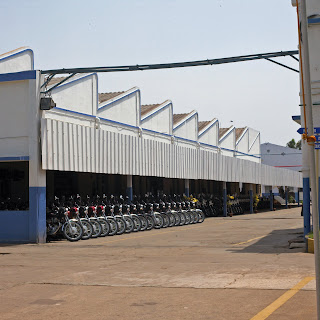 Royal Enfield has secured a 50-acre site for its new factory at the SIPCOT Industrial Growth Centre,  close to the historic motorcycle manufacturer's existing plant at Chennai, on the South East coast of India.

Due for completion by the first quarter of 2013, the new plant will be equipped to produce the entire product range of Royal Enfield motorcycles and will increase the company’s current capacity from 70,000 to 150,000 machines per annum.

Demand for Royal Enfield motorcycles, which have been produced in India since 1949 but retain their 'British DNA', has increased significantly over recent years and, in spite of investment in new plant, the existing factory is reaching capacity.  Following the introduction of the new fuel-injected engine in 2009, with subsequent advantages in performance and reliability, demand for Royal Enfield motorcycles has grown worldwide, while the booming Indian economy has driven increased domestic sales too.

Since opening the Royal Enfield factory in Chennai in 1955, the city formerly known as Madras has attracted many key players in global automotive industry, including Nissan, Renault, Hyundai and Komatsu, which offers significant supply chain benefits to the motorcycle manufacturer.