BEER BIKE UP FOR GRABS 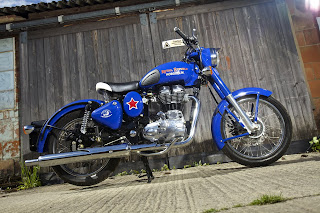 The craftily crafted Hobgoblin beer brand features on the unique machine, which will be given away free in a prize draw.

Ian Ward, brand manager at Wychwood, said: "The Hobgoblin Bullet is a great ‘one off' with a unique blue paint job and legendary graphics of the Hobgoblin, there was no way we could put a price on it. So we've chosen to give it away to one lucky beer and bikes fan."

The Royal Enfield Hobgoblin Bullet is a 500cc single cylinder motorcycle, designed in a classic 1950's style but suitable for today's modern roads thanks to fuel injection, indicators and electric start. Look out for the bike at this year's Great British Beer Festival and the NEC Bike Show.

The prize draw will be open until November 30th 2010 and entrants can put themselves forward to win by texting HOBGOBLIN ENFIELD to 60300 or through the Wychwood website www.wychwood.co.uk. For information on Royal Enfield motorcycles go to www.royal-enfield.com.  Winners will be notified by post following the prize draw.
Posted by Watsonian Squire - Royal Enfield UK at 14:20 1 comment: 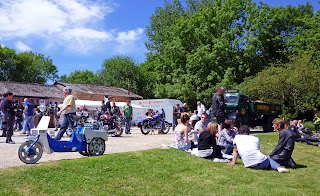 Royal Enfield’s fleet of demonstrator bikes was kept busy at the company’s open weekend, when a record 319 test rides were taken – the largest number in the event’s 5-year history.  Cheltenham and Cotswold Advanced Motorcyclists guided riders through the country lanes surrounding the Watsonian Squire factory, home to Royal Enfield in the UK since 1999.

Visitors arrived on the widest variety of machines, including an Ariel 3 trike and Honda Silverwing sidecar outfit.  On Saturday a Norton Commando High Rider won the prize for Best Machine ridden to the event (judged and awarded by Real Classic magazine) and on Sunday the honours went to a pristine 1953 Royal Enfield Bullet.

Special thanks go to regular guests, including motorcycle adventurer and Royal Enfield expert Gordon May, who has just returned from riding a BSA Bantam overland to Egypt, and world sidecar champion passenger Stan Dibben. Jim Reynolds returned as master of ceremonies, while Frank and Rowena from Real Classic were kept busy talking to readers of their popular publication.  Freshly cooked food was provided once again by the Shipston-on-Stour Sea Scouts, who expanded their popular curry menu with a new chilli, while local Cotswold ice creams were available to cool down afterwards.  Wychwood Brewery, famous for Hobgoblin Ale, travelled from the other side of the Cotswolds in their 1951 Bedford dray, bringing taster packs of their cask ales.

No visit to the Watsonian Squire factory would be complete without a ride in a sidecar and the two demo outfits, a classic Royal Enfield/GP Manx combination and sporty Yamaha XXR1300 paired with a Squire ST3, were both in constant demand, with many passengers enjoying their first experience of a trip in a chair. See more pictures at  www.royal-enfield.com/opendaygallery.

Let us take you for a ride at Birmingham City FC 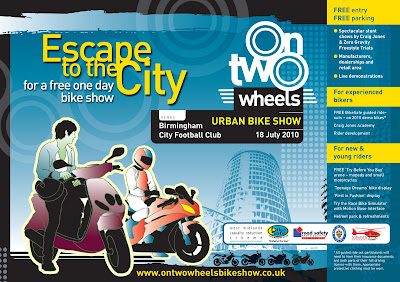 Royal Enfield is delighted to be supporting a new urban bike show in Birmingham.  We'll be offerng demo rides on selected models from our range and it's a great opportunity to come and talk to us if you can't make it to our open weekend on 19/20th June.  Find out more about this exciting event at Birmigham FC on Sunday 18th July by clicking here.
Posted by Watsonian Squire - Royal Enfield UK at 13:40 No comments: